How My Doctor “Cured” My SIBO (For Now, At Least)

Last week I wrote a blog post about my recent diagnosis of SIBO (Small Intestinal Bacterial Overgrowth), which is a gnarly stomach disorder that may be the root cause for up to 80% of IBS sufferers. I’m happy to report that, after a couple months of treatment, I’m now able to eat EVERYTHING except wheat and dairy. This may not sound like much of a victory to any Digestively Normal readers (actually, I’m not sure I have any Digestively Normal readers; and if I do, man, this must be a really boring blog for you). But considering that for the past few years I haven’t been able to tolerate beans, garlic, onions, coconut milk, cruciferous vegetables, or any other high-FODMAP foods (complete list of high- and low-FODMAP foods here), I am ELATED with my broadened diet.

How did I get “cured”? Well, SIBO is notoriously difficult to cure – it often comes back. I’ll talk more about that later. But here’s how I’ve arrived at my much-improved condition.

Immediately following the diagnosis, my functional medicine doctor prescribed a potent cocktail of herbal antimicrobials. Rather than list them all here, I’ll just show you what I was taking: 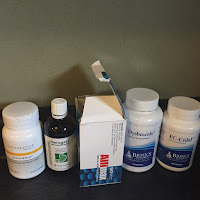 I took those antimicrobials for a month, during which I experienced pretty extreme and consistent bloating and pain, as well as reduced motility. It was not a fun month. Maybe I should’ve stopped taking them after the first few days, but I’m pretty desperate for a “cure,” so I soldiered miserably through the month.

After the month, my doc told me that the pain I was experiencing could be due simply to inflammatory reactions to the meds. He said that we wouldn’t know if they’d worked until I got the inflammation under control. So he took me off the antimicrobials and put me on some herbal anti-inflammatory meds, and lo and behold, after about a week, I found that I was able to tolerate a MUCH greater variety of foods. I was eating onions and garlic for the first time in years, and only experiencing very minor bloating and pain. I even traveled to Vietnam and ate baguettes (like, made from WHEAT), and I was like, hallelujah, god bless me, bread and I are back together.

But then I got home from Vietnam and ate seven Ritz crackers and was knocked on my ass for two days with symptoms ranging from crushing lethargy (i.e. I couldn’t get off the couch) to intense brain fog to behind-bathroom-doors symptoms that nobody here wants to read about. Sooo, I trotted back to the doc, who explained to me that the wheat that’s grown overseas is much different from the wheat that’s grown in the U.S. (all of which is hybridized). Apparently, overseas wheat is much easier to digest, which I don't yet entirely understand (and I will try to get more info about this STAT). But I can now verify this phenomenon as a true fact based on my personal experience.

After the Ritz Cracker Incident, my doc put me on a two-week course of SIBO-eating antibiotics (Rifaximin and Neomycin), and during those two weeks I felt like a million bucks. I ate anything I wanted other than bread and dairy, and experienced zero bloating or pain. Zilch. This is, for me, revolutionary. I've gained about 5 pounds in the last couple weeks eating coconut milk ice cream and rice pasta with REAL marinara sauce (i.e. loaded with onions and garlic) and hummus and other stuff that I haven’t eaten for years. I even ate Chinese food made with soy sauce, which has traces of wheat in it, and didn’t feel too bad afterward.

I've now been off the antibiotics for 2 weeks and I'm still eating a helluva lot more foods than I used to.

So, am I “cured”? Well, there’s a pretty decent chance that the SIBO may come raging back. So I’m now on a pretty extensive protocol of maintenance meds (mainly herbal) for the next couple of months to try to make sure that I avoid relapse. Also, I still can’t eat wheat and dairy, but I’m actually allergic to dairy, so that’ll never change. And I have high hopes that my relationship with wheat may continue to improve with time.

I’ll write about the post-SIBO-treatment protocol next time. For now, this blog is already long, and if you’re still with me, it means that you’re suffering in the same ways that I have for the last 7 years, and my heart goes out to you! Get tested for SIBO!