My Favorite Things About Chicago (now that I'm leaving)

I’ve lived in Chicago for a few years now, and I realize I haven’t always been nice about Chicago, mainly because my Seasonal Affective Disorder couldn’t handle the cold grayness, and also because I got robbed twice.  BUT now that I’m leaving Chi (I’m coming, San Francisco!!), of course I’m reflecting on the great things about this city.  So, in the spirit of loving before leaving, here are my favorite things about Chicago, AFTER the spectacular friends I made here, who truly made my years here worthwhile:

1. The food!  This city is on par with New York or ANY other city when it comes to food.  In my neighborhood alone, I had some of the best food of my life, and I didn’t set foot inside a fraction of the lauded restaurants in Chicago (never went to Next, Au Cheval, etc. etc.).  Some of my favorites: Senza (http://www.senzachicago.com/) – gluten-free food that even gluten-lovers love, and one of the best meals I’ve ever had.  North Pond Restaurant (http://www.northpondrestaurant.com/)  – best steak I’ve had in years (better than Fulton’s, FWIW), in the most gorgeous setting of any Chicago restaurant.  Blackbird (http://blackbirdrestaurant.com/).  Publican (http://thepublicanrestaurant.com/).  Avec (http://avecrestaurant.com/).   Peasantry – best burger I’ve had in years (http://avecrestaurant.com/). Piccolo Sogno (http://piccolosognorestaurant.com/). Bongo Room for brunch (http://thebongoroom.com/). La Crêperie in Lakeview.  Gyu Kaku downtown (yeah, it’s a worldwide chain, so what).   I could go on and on.

2. And, because it’s a category unto itself, Alinea!  See my previous blog post!  Maybe the most expensive restaurant in the universe, but worth every penny.

3. Landmark Century Centre Cinema (http://www.landmarktheatres.com/market/chicago/landmark'scenturycentrecinema.htm).  My. Favorite. Theater. Ever.  I went here almost every week, and just saw whatever was showing there, because it was almost always fantastic.

4.  Looseleaf Lounge (http://www.looseleaflounge.com/) – one of my fav work spots, staffed by some of the nicest peeps in Chicago.  Great tea selection, fantastic food.

5. Lakeview Pantry (http://www.lakeviewpantry.org/).  If you want to do something SUPER fun and equally rewarding, volunteer for this place.  It was always my best night of the week.

6. North Pond Nature Sanctuary (http://www.lincolnparkconservancy.org/about_the_north_pond.html).  We didn’t have much good weather during our 3 years here, since we always left for the summers, but when the weather WAS good, this place was my sanctuary.

8. So many rock climbing gyms!

So, thanks for all that, Chicago.  I’ll come visit you again.  Laterrrr!
Posted by Laura Thomas at 11:07 AM No comments:

Email ThisBlogThis!Share to TwitterShare to FacebookShare to Pinterest
Labels: travel

My dinner at ALINEA!!!

On Thursday I kicked the FODMAPS diet to the curb for a night, and spent a small fortune having dinner at Alinea, one of the best restaurants in the world. There’s really no good excuse for spending THAT MUCH MONEY on one meal. We could’ve spent a weekend at the Post Ranch Inn for that amount. We could’ve bought two plane tickets to Costa Rica. But I don’t for even one second regret it. That was, as my friend Vicky put it, a “life-changing meal.”

A meal at Alinea is as much an art experience as it is a food experience.  Every course is beautiful and shocking.  Like, I mean, literally shocking.
When we entered, we were in a hallway that was completely dark except for a few tiny lights in the floor, and the walls and ceilings were COVERED with flowers.  Inside some of the flowers was passion fruit and coriander cotton candy for us to eat while our table was prepared. 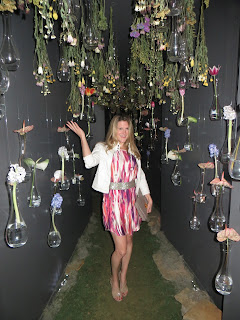 The service was impeccable.  IMPECCABLE.  We had a primary waiter, a secondary waiter, several other waiters bringing our food (of course my food was placed in front of me at the same time as Andy’s), and a sommelier.   I got the Reserve Wine Pairing, which doubled the course of my meal, and I’m not sure that I was able to fully appreciate the quality of the wines, but I did feel like an actual Queen when I was drinking a 1968 Madeira.
Below is a list of the NINETEEN dishes that followed the cotton candy (about half of the dishes were a single bite).  I wish I’d taken pictures of all of them, but I was too focused on the food.  I’ll include a few pix and videos.  I wish I could eat like this every day:

1. First, Oestra caviar, which was resented on a spoon dipped in crème fraiche.  On the spoon was also a capsule of warm butter that popped in my mouth, spilling warm butter all over the caviar.  !!!  Wine pairing was Champagne Jean Lallemant – ‘Verzenay – Grand Cru’ Brut NV

2. Scallop with mirin and bonito.  The scallop was brought with a hot rock that we put it upon in order to sear it.  Wine pairing for the next 6 bites was a Ginga Shizuku sake – “Divine Droplets” Junmai Daiginjo-shu, Hokkaido-ken.  I don’t know what all those words mean, but the Sommelier said them like they were all important, so I’m writing them all down. 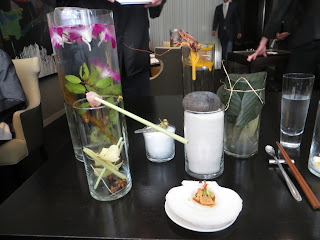 3. In the back you can see a vase covered in a banana leaf, with another banana leaf inside it.  In that vase was a piece of kampachi being smoked while we ate the other bites.

4. In another vase, the waiter poured lemongrass tea, and we put a bite of monchong snapper into that vase to marinate it in the tea, along with some star anise.

5. The blue prawn on the short vase had a tamarind and mint sauce.

6. The shrimp head on the vase was gross.  I was told to put it in my mouth whole.  It had “togarashi and pincage” on it.  I don’t know what those things are, but I will not be eating another shrimp head.  It was the only big loser of the night.

7. In the vase filled with orchids is a floating glass cup in which a piece of onaga is marinating in white soy, sesame, and ginger.  It was amazing.

8. A small vase of pineapple, with pineapple slush-ice (it was literally almost like a slushie) cleared the palate after all that fish. 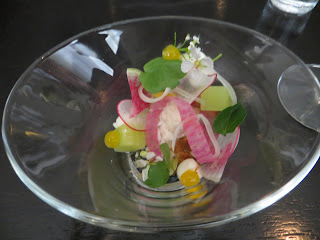 10. Smoked octopus on a bed of artichoke-cream puree, with eggplant, allium, and fried fennel.  I wish I had a pic of this!  It was beautiful!  Wine pairing, Nicolas Joly ‘Clos de Bergerie’ Savennieres 2007.

11. Veal cheeks (I do NOT EVER eat veal, but I tried it since it was put in front of me.  I didn’t even like it)  with asparagus, and “the kitchen sink,” which is every ingredient they had on their “best ingredients of the season” list that hadn’t been used in another dish.  It wasn’t my favorite course.  Wine pairing was Dom Laurent ‘Clos Des Chenes,’ Volnay 1996 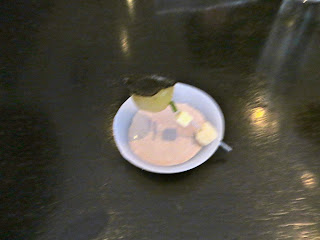 13. My FAVORITE course!  I had four small pieces of duck prepared four different ways, and with that we got a platter containing 60 different garnishes.  You can see a picture of the platter here - Unfortuantely I didn’t get my own photo.  They told us to match two or three garnishes with each bite.  We didn’t know what the garnishes were until they were in our mouths!  Some of our combos were INCREDIBLE (I paired a brown paste with some brown flakes, and it turned out to be a dark chocolate paste with some kind of strong sea salt, which was amazing on the duck) and some were AWFUL.  But it was the most fun I’ve ever had eating food.  Wine pairing, Lopez de Heredia ‘Vina Tondonia,’ Rioja 1994.

15. Five kinds of ginger!  The teeniest bites imaginable, each one the size of my pinky fingernail.  They were amazing, and PERFECT palate-cleansers. Wine pairing, Barbeito ‘Fraqueira’ Boal, Madeira 1968. 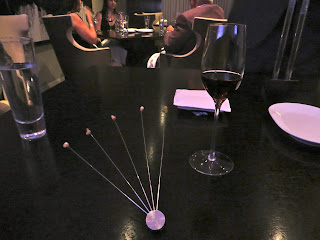 16. A green apple taffy helium balloon, which you suck in and talk funny and then eat the taffy.  WHATTTTT.

17. Strawberries in several forms (some of them were freeze-dried, some fresh, some made into ice cream, and I forget what else), with sorrel, sassafras, and pine nut.  Wine pairing Disznoko ‘5 Puttonyos,’ Tokaji-Aszu 2005.  I don't know what that means but it was really dark yellow and almost tasted like a red wine. 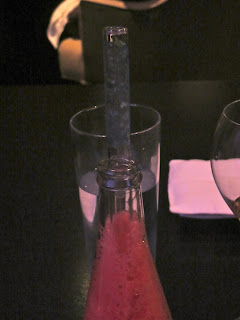 Posted by Laura Thomas at 9:56 AM No comments:

Email ThisBlogThis!Share to TwitterShare to FacebookShare to Pinterest
Labels: Food

What to eat on low-FODMAP diet: Snacks

Hulloo again.  Who are you?  I see from my stats page that there are lots of you reading these FODMAPs posts, but I have no idea who you are!  Email me, yes?  I’m at laurabama@hotmail.com and I would love to know who you are.  :)

Following on my previous posts about what to eat on a low-FODMAP diet, here are some things that I eat when I need a li’l snack:

2. I often make a smoothie, which some people with IBS might not tolerate due to the mixing of fruits and veggies, but here ‘tis, if you want to try it.  It is seriously better than dessert: half a banana, two strawberries, ¼ cup blueberries, 1TBSP peanut butter, 1tsp flax seed, 1 tsp Chia seeds, a big handful of spinach (or other leafy greens), and some rice milk.  BOOYAA it is so good.

3. Any of the low-FODMAP fruits, which you can find on this list -
http://laurabama.blogspot.com/2013/01/comprehensive-list-of-highlow-fodmap.html

4. Good nuts (again, see the list above – most nuts are fine in small quantities EXCEPT for pistachios, which you should stay away from).

5. Corn tortilla taco with tomato/greens/anything else from the good list.