http://www.youtube.com/watch?v=72iIVXPoBps
(Above link is a SUPER low-fi video of moi playing "Right Now" in my living room!)

Hello my lovely friends!  A bit of a deviation for this week's blog.  As many of you know, in the past I put out 4 albums of original music (www.laurathomasband.com) and until last year I played regular gigs all over the Northeast (and occasionally in Cali).  And then the music industry sucked out my soul and I needed a year off.  Last week I picked up my guitar for the first time in a year because I missed my song "Right Now," and I recorded a vid of me playing the song in my living room.  The sound is crrrrap, but I actually have no amps or sound equipment in this, my lovely summer home in the mountains.  So this is the best sound I could eek out in a completely unplugged sitch.

Hopefully, if the dormant music spirits within me continue to wake the F up, I'll be recording album #5 later this year!  Will keep you posted.  And let me know if you'd like to hear more songs this way.

Oh, btw, to make this blog a teency bit relevant to the whole Grammarfiti theme, I'd like to say that I proudly realize that the phrase "I'm good" in the chorus isn't accurate.  And probably that makes me a hypocrite.  And I'm good with that.  :)

Thanks for listening, mwwwwah xoxo.
Posted by Laura Thomas at 9:44 AM No comments:

Click on the link above for my latest video blog - turns out it's "champing" at the bit (who knew), and it's never ok to say "her and I."

See below for written version, in case videos burn your eyes!

Posted by Laura Thomas at 9:21 AM No comments:

On another subject, one of my biggest pet peeves is that everybody seems to think that if they use the word “I” instead of “me” in an indirect object clause, they’ll sound smarter. Like this, from Timbaland:
“I got a plan for you and I. Let's journey across the Venetian skies.
Can I have some of your cookies, can I have some of your pie”

(First of all, gross, Timbaland, you can NOT have some of my pie.)  That’s all kinds of wrong.  In any phrase like “you and I” or “her and I” or “Jay and me,” you can remove the other person and see if the phrase works.  Like this: “I’ve got a plan for I” (note that I helped Timbaland out also with the missing verb – ‘ve).  We can all agree that “a plan for I” sounds ridiculous.  Actually the whole song is ridiculous.  It’s one of the worst songs I’ve ever heard.  You should totally listen to it on iTunes, just so you can be amazed at how bad it is.

“And so began our reign. The trinity, she and I can.
No weather man could ever stand where she and I came”

Kanye West demonstrates an even dumber-sounding mistake – he’s not aware that the word “me” cannot be a subject!  You can’t say that “me went on tour,” so you also can’t say “Jay-Z and me went on tour.”  But since Kanye doesn’t read (as he told us on his VH-1 storytellers appearance) and he went to school just so he could do lunch and gym, he still uses this incorrect syntax:

So, I guess the moral of the story is that if you are going to school just so you can hang out during lunch and gym, you better be a good rapper, because that’s the only career available to you where you can make a ton of money with absolutely atrocious grammar.

Posted by Laura Thomas at 9:17 AM No comments:

Vid Blog - you CAN be nauseous, but you best not say "would of"

http://www.youtube.com/watch?v=7w_G2vONr1c
Click the link above for my VIDEO BLOG about how you CAN be nauseous, but you best not say you “would of” done anything.  Ever.

Turns out you CAN be nauseous, but you best not say you "would of" done something

Aww, snap.  I used to loooove jumping up on my grammar high horse when people said “I’m really nauseous.”  I’d tell those people that they were in effect stating that they were disgusting enough to make other people NAUSEATED.  Because, of course, we grammar sticklers think that the word “nauseous” only means “causing nausea,” whereas the word “nauseated” means” “feeling nausea.”  Well, we all need to take a deep breath and apologize, because we’re wrong.  According to Merriam-Webster, the definitions of nauseous are:
1.  causing nausea or disgust : nauseating
2.  affected with nausea or disgust

And M-W says: “Those who insist that nauseous can properly be used only in sense 1 and that in sense 2 it is an error for nauseated are mistaken.” http://www.merriam-webster.com/dictionary/nauseous

Ok but one thing I will not be shutting up about is how silly it makes you sound if you ever say that you “could of” or “would of” or “should of” done something blah blah.  There’s no such expression, so if you say that you’re just playin’ yourself.  What you should HAVE said is that you “could HAVE” or “would HAVE” done something.  Or you can say “could’ve” or “should’ve.”  This whole problem arises from the fact that “could’ve” sounds phonetically like “could of,” but alas, phonetics have screwed us again.

Even the Biebs got it wrong last week when he Tweeted, “i could of sang to myself. it would of been like being in the shower.”  Come on, little Biebs, best get back in 7th  grade, or wherever you left off.  Rock Stardom ain’t makin’ you smarter.
https://twitter.com/justinbieber/status/216914335061118976

This, from the “Business Insider: “Imagine your investment adviser proposing a sweetened barbell portfolio…You would of likely canned the wacko faster than they sold Nike stock last week.” http://www.businessinsider.com/the-ideal-portfolio-gold-sugar-bunds-and-francs-2012-7
I recommend that you do not take business advice from someone who can’t speak proper high-school-level English.

http://www.freakyts.com/siteimages/IF%20WE%20ONLY%20WOULD%20OF%20HAD%20IMMIGRATION%20LAWS.jpg
Here’s a T-Shirt you can buy, showing a picture of a Native American and proclaiming, “If only we would of had immigration laws.” Even if the writer had used the conditional perfect tense PROPERLY (i.e. “If only we would have had…”), the sentence would still be all wrong, because you don’t use conditional perfect tense with a past tense “if” clause. Only past perfect will do here: “If only we had had immigration laws.”

But of course, I do hear what they’re saying.  If the Native Americans had had immigration policies, and refused us like we refuse so many immigrants now, imagine how the world would be different.  We might have a big healthy ozone layer up there.  Hard to say.  Regardless, I just don’t think it’s fair to put such bad grammar in the mouths of this continent's first inhabitants.   Kind of makes me nauseous.
Posted by Laura Thomas at 10:07 AM No comments: 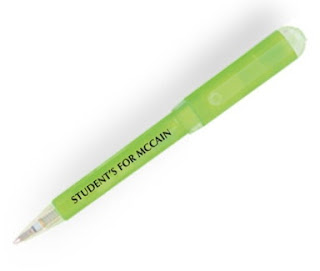 This hurts my eyes
http://americandigest.org/mccainpen.jpg

Posted by Laura Thomas at 12:36 PM No comments: