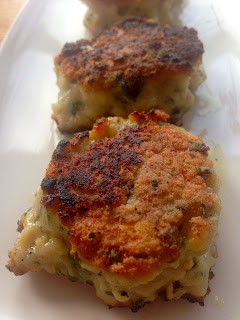 Honestly, like, honestly, this turkey sausage is so good that I could eat it for breakfast, lunch, and dinner. And since it’s low-FODMAP, sometimes that dream comes true.

-In a large bowl, hand-mix the turkey, herbs, maple, salt, and 1 tablespoon of the flour.

-Place the rest of the flour on a plate.

-Shape the turkey mixture into about 12 patties, dredging each one lightly in the remaining flour.

-Heat the olive oil on medium-high heat (I find that my cast-iron pan works particularly well for this dish).

-Drop the patties in the pan and cook for about 7 minutes per side until they’re browned, and cooked all the way through (cooking time will depend on the thickness of the patties so you’ll need to cut into one of them to see if it’s done).

Good luck not eating them all at once!

*The flour I use is made from brown rice, potato, and tapioca. I recommend that you avoid using flour that contains oats, corn, or quinoa, as these things can be difficult for some people to digest (for example, I have trouble with corn and oats).
Posted by Laura Thomas at 5:32 PM 4 comments: 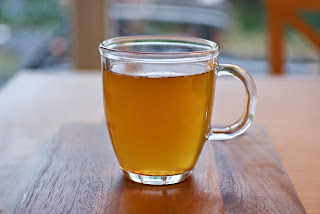 Bone broth is rich in minerals and proteins that support our body's healing processes, as well as digestion and skin health, among other things. If you have any digestive disorder or immune problem, it’s a good idea to drink bone broth regularly. I put about a cupful of broth into a mug, heat it, and drink it every day. You can also use bone broth to make soups, or you can use it to flavor rice, vegetables, etc. Here’s my low-FODMAP chicken broth recipe:

Chicken Broth
2-3 pounds of chicken bones (they can have some meat on them, but it should be mostly bones)
1 gallon of water
2 tablespoons apple cider vinegar (this is essential for leeching the minerals out)
2 carrots carrots, coarsely chopped

2 celery stalks, coarsely chopped
2-3 bay leaves (optional)
1/2 teaspoon salt taste the broth after a couple hours and add more if you think it needs it)

In a stockpot, combine the water, chicken, vinegar, and vegetables, bay leaves, and salt. For best results, let it all sit for half an hour before turning on the burner. Then bring the soup to a boil. As soon as it’s boiling, scum will start rising to the top. Remove the scum with a big spoon – this is nasty stuff that you don’t want in your broth! Reduce the heat, cover and simmer for 24 hours. Tip: you’ll want to reduce the heat enough that the stock is barely simmering. If you leave on too much heat the water will boil away.

After 24 hours, pour the broth through a strainer into another large pot. Refrigerate until the fat rises to the top and congeals (this might take a full day). Skim off the fat (you can reserve it for cooking). Now you can pour the stock into smaller containers and freeze whatever you can’t use within a few days.

NOTE: If you use beef bones instead of chicken, the broth will be much more gelatinous. It's pretty gross when it's cold, but it'll liquefy again when you heat it up. It's not as tasty to drink as chicken broth, so if you're new to the world of broth, I strongly recommend that you start with chicken! Move on to beef when you're a broth veteran and you can handle its uber-bony taste/texture.
Posted by Laura Thomas at 6:24 PM 2 comments: 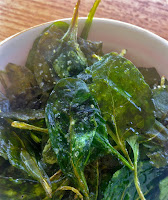 Kale is my enemy for so many reasons, not least of which is that it’s high-FODMAP and super hard to digest. Also I think it’s gross unless it’s drenched in olive oil and baked to a crisp. Luckily, I just discovered that spinach chips are as yummy as kale chips (and by that I mean, anything soaked in oil and sea salt is delicious). Recipe:

Ingredients:
Two cups of raw spinach
1-2 tablespoons of olive oil, depending on how oily you want them
Sea salt, to taste

Directions:
-Preheat the oven to 350 degrees.
-Put the spinach in a large bowl and toss in olive oil and sea salt.
-Lay parchment paper over a baking pan and spread spinach on top, in a single layer.
-NOTE: you can put the spinach straight on the pan (not on parchment paper) if you want – it will be oilier this way, and you’ll have to scrape it off the pan with a spatula, but this wasn’t a problem for me.
-Bake for 10-12 minutes or until crispy. The timing can be tricky – I recommend that you check on it every minute starting at 10 minutes to see if the leaves are crisp.

Enjoy.
Posted by Laura Thomas at 9:59 AM No comments: 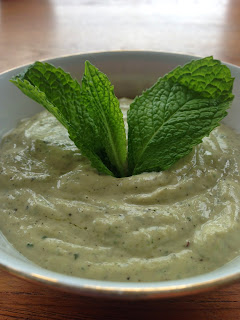 I can’t tolerate garbanzo beans (or any kind of beans, really) but I miss eating hummus. This Low-FODMAP almost-hummus recipe is fab! NOTE: To keep this low-FODMAP, you shouldn't have more than 2 tablespoons of hummus per serving, because high quantities of tahini include enough FODMAPs to cause digestive distress.

Directions:
1. Sauté the zucchini in olive oil until it starts to turn soft.
2. Place the lemon juice and tahini in a blender or food processor and blend for about 30 seconds (it should look creamy and smooth)
3. Add the zucchini, olive oil, sea salt, black pepper and blend.
4. Garnish with fresh mint leaves or cilantro if you want.