What To Drink (in an adult way) on a Low-FODMAP Diet: ALCOHOL

I love me a good happy hour.  Sadly, though, my tum doesn’t do a good job with beer or super-sweet drinks like wine (and I do LOVE wine).  But if you’re like me, I have stupendous news for you: happy hour need not be put into the food graveyard with bread and cheese.  Here are some adult beverages that are easier for me (and hopefully you?) to drink:

1. Vodka-seltzer-lime is my bestie.  We hang out often at 6PM.  Vodka is very low-calorie, seltzer (or soda) has no sugar, and lime has only a teency bit of sugar.  The clear liquors are much easier to digest than sweet drinks like wine or rum, so go at it.

2. Whiskey!  My second-favorite happy hour drink is also fine for me.  Particularly if I don’t mix it with soda (which has high-FODMAP sweeteners like high fructose corn syrup and artificial sweeteners).

3. If you DO try beer, make sure you get gluten-free beer!  It’s much easier to find these days, since half the population of the Earth is as annoying as I am in terms of food intolerances.

4. If you gotta drink wine, GO DRY.  I love white wine as much as I love sunshine, so sometimes I still go for a glass of dry New Zealand Sauvignon Blanc.  It’s just too good to give up forever.

5. Gin might also be fine for you, especially in small doses, but who would want to drink gin anyway?  Blech.

Here’s the full list of good and bad foods on the low-FODMAP diet.  Let me know if you see anything that needs to be added or changed!  http://laurabama.blogspot.com/2013/01/comprehensive-list-of-highlow-fodmap.html

xo
Posted by Laura Thomas at 8:16 AM No comments:

Article from The Atlantic Re: Streamed Music Pay-Outs

As a follow-up to last week’s blog about how much musicians really make from Spotify, here’s an article from the Atlantic showing that if a musician wants to make minimum wage, she needs to “sell” over four MILLION downloads per month on Spotify: http://www.theatlantic.com/business/archive/2011/11/how-musicians-really-make-money-in-one-long-graph/249267/

Posted by Laura Thomas at 7:59 AM No comments:

How Much Do Musicians Make From Spotify?

You used to buy CDs, and then a decade later you bought all your music on iTunes, but now you only listen to music on Spotify, right?  Well, just so you know, you are making a bunch of musicians eat Ramen noodles right this second.  Like, they are hungry for arugula and you are personally putting dry processed pasta in their mouths.

Why? You may not want to know this, but Spotify is financially disastrous for musicians.  Of course, any musician worth her salt has her stuff on Spotify, because if she’s not on Spotify, she’ll drift off into oblivion.   Because about half the population accesses new music on streaming music services.  So, every struggling musician pretty much HAS to get on her knees before the Online Streaming Gods.  And don’t get me wrong – if you can’t afford to buy music at 99 cents a song, I (and probably a lot of other musicians) would MUCH prefer that you listen to my music on Spotify than not listen to it at all.  More than anything, musicians just want to get their sounds out into the world.

But here’s the problem: Spotify and the other services pay musicians as low as ONE TENTH OF ONE PENNY.  I am not joking.  When you listen to my song on a streaming service, I often get paid about one tenth of one penny (that number varies depending on a number of factors that are still a mystery to me – it seems to vary between 1/10th of a penny and 1 penny, and it’s more often on the lower side of that range).  At 1/10th of a penny, you’d have to listen to a song over 600 times to equal the amount of money that I get paid when you buy one of my songs on iTunes (they give me about 60 cents for every purchased song).  And nobody listens to a song 600 times.   The “most played” songs in my personal iTunes library have about 50 listens.  So let’s say that 50 is an average “most played” number, and my songs are the ones you play the most.  That means that after you listen to my songs so many times you could sing it in your sleep, you will have paid me a total of less than one penny for all that listening.  LESS THAN ONE PENNY.

Here’s a scenario: Since the payment scheme on Spotify is variable (which must depend upon who’s advertising at the moment when a song is played), let’s assume that my average payment on Spotify for one listen is 3/10 of one penny, or $.003.  I’d have to get about 170,000 listens to make up the $500 in album costs.   And that’s before I’ve made a penny of profit.  If I want to make just $1,000 profit on my album, I need to get HALF A MILLION LISTENS.  I basically need to be famous like Katy Perry.  To make a total of $1,000 on my album.

So you’re thinking, well, at least musicians still make money from live music.  Nuh-uh.  For my last show, which was a packed house, after I paid the musicians, and paid for my gas to get to the gig, I made zero dollars.  The gig was a “pass-the-bucket” situation, and people were quite GENEROUS for that kind of situation, giving on average $4 per person.  At many “pass-the-bucket” gigs, fans give an average of $2 (and that’s despite the number of uber-generous fans dropping Twenties in the bucket, so that means most other people are droppin’ in less than two).

Sadly, it’s becoming increasingly impossible to be a professional songwriter.

So what can you do?  If you can afford it, BUY MUSIC ON iTUNES!  Or, even better, BUY REAL LIVE ACTUAL CDs like you did in the 20th century!  And another plea - don’t complain about the fact that your favorite musician sold out because he has a “Supercuts” advertisement on the side of his bus.  And don’t complain about high concert ticket prices.  The musicians you love, the ones who just MADE YOUR NIGHT, are trying VERY hard to make enough money tonight to afford a dinner that’s not Ramen noodles.
Posted by Laura Thomas at 11:19 AM 1 comment:

Where music and I now stand, after our break-up and make-up

After a painful break-up, music and I are renewing our relationship on a trial basis.

For 8 years, I performed at least once a month in NYC and all around the East Coast.  At first I loved performing, but the music industry can be a cruel, soul-crushing roller coaster, and it eventually took all the joy out of music for me.  There were a few months after I stopped playing when I didn’t even want to listen to female singer-songwriters, because I felt envious of the successful ones and pity for the struggling ones.

I didn’t touch my guitar for over a year.  Didn’t sing a note.

And then one day I wrote some new songs about fragility and disappointment and acceptance and moving on, and I wanted to lay them down.

So I went to John Clement’s farmhouse studio in Pennsylvania and recorded the songs, with no regard for the music industry or my fans or my future success or failure.  I just made the music I wanted to make, and it felt good.

When Theresa Previ was designing the (absolutely beautiful) album art, she asked, “Which one’s the hit song?”  And I told her, “There’s probably not one song on this album that would be a commercial ‘hit,’ and I couldn’t care less.”

“little bones” is not a commercial album.  It won’t be famous.  And I. don’t. give. A. Shit.  Because I am in a place now where the only way I can make music is to forget about everything except that exuberant feeling I get when I’m putting an honest emotion into a sound-poem.

Don’t get me wrong – it’s not that I don’t care about the people listening to the songs.  Quite the contrary.  When Jill Hindle, the album’s first listener, told me she had to pull her car over because one of the  songs on “little bones” made her cry so hard she couldn’t see the road, my soul soared with satisfaction.  I still hope hope hope that my music communicates with people.  I just needed to stop worrying about whether that would happen.

I hope that “little bones” is something people lean on.  I hope it makes you smile or cry.  Let me know if it does.  I won’t tell anyone.  But it’ll make my day.

-“little bones” is now available on iTunes (search for “Laura Thomas Band”), Spotify, CDBaby (http://www.cdbaby.com/cd/laurathomasband), and all the other sites.

Hi!  At long last, the new Laura Thomas Band album, “little bones,” is available online!  You can get it on iTunes by searching for “Laura Thomas Band.”  Please check out the clips, and buy it (for only $8.50) if you like it! 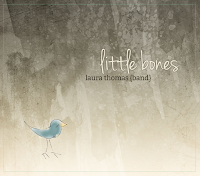 If you like real old-fashioned CDs with pretty album art, you can buy hard copies from CDBaby (you can also hear clips here):
http://www.cdbaby.com/cd/laurathomasband

It’ll be on all the other digital download music sites SOON!

If you like it, please write a review on CDBaby or iTunes, or your blog, or anywhere else!  And if you don’t like it, shhhhhhhhhh!  :)

Also, you’re ALL invited to the album release party in New York on Wednesday July 17.  Details: